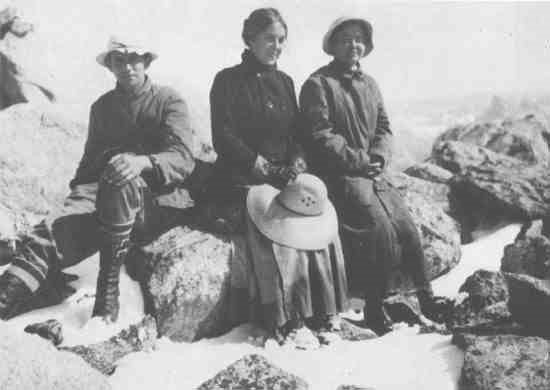 Fig. 1. A group atop Wind River Peak on Aug. 4, 1913, including Cynthia Wilkes and Branson's wife, Grace Muriel Branson, with a student identified only as Adams (photo from Univ. of Missouri archives)

The following article on the early history of the camp is reprinted with permission of Earth Science, summer 1985, v. 38, n. 2.  Copyright 1985, the American Geological Institute.

A PIONEER IN WYOMING

When they first came to the foothills of the Wind River Mountains near Lander, Wyo., their horses packed with pup tents, bed rolls and pickaxes, the locals sized them up as "rock hounds from back east". That was 1911. Almost 75 years later the Edwin B. Branson Field Laboratory, which is operated by the University of Missouri, Columbia, is the longest continually running geology field camp in the U.S.

In 1910 Edwin B. Branson was a newly appointed geology professor at the University of Missouri; he believed that "hands-on" experience was the key to learning about Earth. For his students to get that experience, Branson began organizing a summer field camp. He remembered the Triassic Popo Agie Formation near Lander, Wyo., where, as a University of Chicago graduate student, he had collected fossil amphibians with his professor, S.W. Williston. The area amazed young Branson with its extensive patchwork quilt of geologic samples. The region includes excellent exposures of rocks, ranging in age from Precambrian to Pleistocene. Abundant examples of metamorphic, volcanic and plutonic igneous and marine, non-marine and glacial sedimentary rock types are present. Many geomorphic and tectonic processes are well represented, and the region is a storehouse of petroleum, coal, uranium and iron. It has an agreeable summer climate and sparse vegetation.

In the early camp years, tents dotted the various canyons on the northeast slope of the Wind River Mountains. Soon the Middle Fork Popo River became the favorite camp site of the students and instructors.

In 1929, Branson, working with Maurice Mehl, University of Missouri, Columbia, arranged an educational property lease from the U.S. Forest Service.  The property become known as Camp Lander, later renamed Camp Branson. In 1948, in honor of his retirement, the camp was officially named the Edwin B. Branson Field Laboratory.

Tents lighted by kerosene lamps soon gave way to a small cabin that served as an office and living quarters for Branson. In the early 1930's a small log dormitory was built, where 16 persons could sleep on hard wooden bunks.

During the next two decades, several other structures were built, mostly by student volunteers who were compensated with summer board. They were supervised by Mehl, Raymond Peck and Clayton Johnson.

Each decade brought improvements to the field camp.  With money from the Works Projects Administration, water and sewage facilities were installed in the 1930's, electricity in the 1940's and early 1950's.

As the camp grew so did its student enrollment. Ten budding geologists made up the first class in 1911; today the camp is limited to 45 students. Early in the camp's history, and for the last 30 years, more than one third of the students come from colleges and universities other than the University of Missouri. In the early 1950's, the camp was listed as a summer field course in Harvard's undergraduate catalog.

What Branson started in 1911 in the foothills of a Wyoming mountain range continues educating your earth scientists today. Many of the camp projects are near two of the oldest oil-producing structures in North America --Dallas and Derby domes.

Their exposures of Mesozoic rocks provide a field laboratory for the interpretation of sedimentary environments and the structural mapping of faulted anticlines. Students map the metamorphic-igneous terrain in the region of South Pass and finish their studies with trips to Yellowstone and Teton national parks.

Branson's early vision of the importance of field geology with his establishment of an educational lease agreement with the U.S. Forest Service paved the way for decades of successful "hands-on" geological studies.